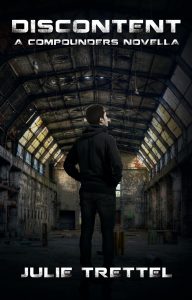 Charlie Jenkins has big shoes to fill in the wake of his father’s death. He hasn’t always done the right things in the past, but he’s trying his best for his family, the Compounders, and all the residents of nearby Wythel, Virginia, the small town just down the mountain from the Compounder’s bunker. When his sister, Holly, goes missing, Charlie is fueled by anger, hatred, and resentment. Can he get past his emotions to be the man he was raised to be?

They aren’t safe. People are scared. The stakes are high. The enemy now knows exactly where they live. Change is inevitable. With the Compound once compromised, and Wythel more vulnerable than ever, it’s clear that both need a leader who can step up and give them hope. Can Charlie be that leader … or will his anger drive him to destroy them all?

You know Holly’s story from Book 2, The Compounders: Dissension. Now get a unique glimpse at what Holly left behind and how her friends and family coped in her absence in this parallel account from the perspective of Charlie and friends.