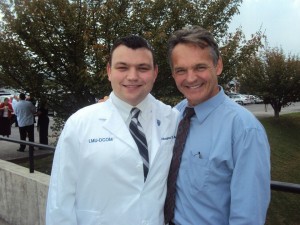 BRAD HUMPHREY M.A./ M.S. is arguably America’s leading expert in working with troubled youth. He has been featured on PBS and Geraldo, and has won numerous awards for his teaching and counseling. Officials ranging from Canada, to San Diego, California, to the Commonwealth of Kentucky, have sought his expertise when confronted with vexing youth problems. A therapist, college teacher, former counterintelligence agent for the Marine Corp, police officer, principal, foster parent, coach, and father of three, he has seen and done it all. He is rapidly becoming recognized as a national leader and child advocate in the fight against Obesity.

Clayton Humphrey, Freshman, University of North Florida. Clayton is Brad’s son. After his parents separated, Clayton ballooned to 243 pounds (on a five foot ten frame). A “bad back,” “bad knees,” “bad feet,” “bad attitude” a little depression, and good deal of denial soon followed. So how did it happen? And more important, how did Clay and his father turn it all around? Clayton graduated salutatorian in June of 2003. He had a 3.98 average, weighed 188 pounds and was MVP in football and soccer… in both his junior and senior years!

Come read the remarkable tale & feel the effects of going on “The Values Diet!“