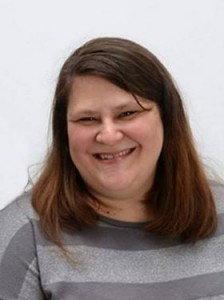 Kamel Press is press is excited to announce the signing of a new author Julie Trettel, the start of a new series, and the cover reveal of The Compounders – Book One of the Compounder Series!

A full time Systems Administrator, Julie is also a Wife, Mother of four, and part time Musician and Writer. She resides in Richmond, VA and can often be found writing on the sidelines of a football field or swimming pool. She comes from a long line of story tellers and has a thousand stories running through her mind.

Writing has always been a stress reliever and escape for her to manage the crazy demands of juggling time and schedules between work and an active family of six. In her “free time,” she enjoys traveling, reading, outdoor activities, and spending time with family and friends.

Her husband, James, challenged her to write a book in one year. She took on that -challenge – this is her first published work.

Compounders is an exciting novel that combines the genres of action, dystopian, romance, and an overtone of post-apocalyptic fun!

In the wake of terrorist attacks, economic collapse, and martial law, America has become a nation at war and a country at odds. Mike Jenkins was determined to protect his family, moving them to a remote compound on a mountain in western Virginia. He was prepared for the day things started to go south, and though his friends and neighbors laughed, his foresight was all that was keeping his family, and several others, safe from the carnage below.

Holly Jenkins couldn’t wait for the elders to open the bunker doors so she could roam the surrounding area and feel free once again. It had been years since she had been able to escape to her cave in the side of the mountain. No one knew about that cave; it was her special hiding place. But little did she know that opening the bunker doors once again would change her life forever.

Now, with the evil that lay below in the form of the AMAN, reports were coming in that would eventually draw the compounders into battle.  They were prepared for war, but nothing could prepare Holly for her own battle between the two men she had grown to love… and the third she was being forced to marry.

Chaos will reign. Will love will survive?

Release date will be early December!